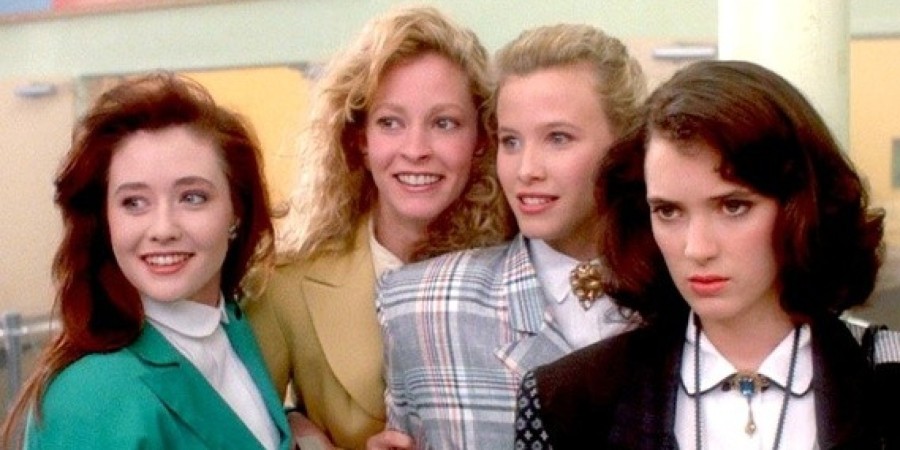 When I was younger, I longed to be non-descript. Not exactly longing to be white, or have blonde hair, I just wanted to fit in with the other girls. Try as I might, I couldn’t do it. There was a myriad of reasons: I was socially awkward, I didn’t dress in the right clothes, I didn’t have the right shoes, I was too young, I didn’t have a boyfriend… the list could go on and on. I was seldom a target of bullying–a couple of scraps with the mean girls identified me as someone who would fight back–but I was excluded. There was an “otherness” around me that would not allow me to fit in, period.  It never occurred to me that the girls I wanted to be like were largely white, or upper-middle-class, and Protestant. I took refuge with the outcasts, and I was better for it.

But every once in a while, I would find myself sitting at the popular table for one reason or another. Maybe I helped someone with their homework, or maybe someone lost a bet or something. But here’s the thing, every time that happened, I realized I didn’t really want to sit there. Because here’s what they don’t tell you about sitting at the popular table when you are something other: you will be constantly reminded that it is through the mean girl’s indulgence that you are able to sup with them.  If not for their pity, you would be sitting with the rest of the other girls, feeding off the scraps they throw from the table.  I realized pretty quickly that I would much rather just bring my own lunch instead of eating anyone’s scraps… either at or under the table.

I’m a long way from those crazy middle and high-school years, but sometimes I feel the same thing from my well-meaning CIS-white friends. They want me, the POC to sit with them at the CIS-white table. Because that means they’re helping in the fight against racism! They’re trying… it’s just that…

…as my old sociology professor, Dr. Trepaigner used to say, “they mean well enough, bless their little white hearts.” In their mind, they honestly think that accepting a POC as (for all practical purposes) “an honorary white person” is the way to go.  They don’t really realize that it doesn’t work that way… it can’t  work that way.  Most POC are not interested in becoming white, they just want to not be something other than white.

I’ve experienced this a number of ways, from friends, from family, and from strangers. Every single one of them thought they were doing a good thing. Every single one of them thought it was a compliment to say things like, “oh, not like you honey, you’re family,” or “well, you’re one of the good ones, you know.” I’ve had people speak for my experience without letting me speak. I’ve had people nod as I explain myself, but only hear what they wanted to hear… none of them understood.

I was trying to explain it to my oldest the other day, and I likened it to being an adopted foster child.  As a foster child, you may have known unspeakable pain and suffering, and you long for stability. And maybe someone fosters you, and you get along with the family and the other kids and they decide to adopt you. And you are THRILLED… at first.

Maybe…. every so often… members of your adopted family will remind you how lucky you are that they adopted you, and how much better off you are now that you’re with them.  Not in a mean way… in a.. “we’re so glad we rescued you and now you’re our family” kind of way.

You are encouraged to forget your past and everything that may have come with it. YES, the pain, but also the happy times, too. Because now this is your family and reality. And every time you try to explain that the time before they adopted you was bad, yes, it also is a part of you and who you are… they look at you like you like a rescue dog that peed on the rug. How could you be so ungrateful? Didn’t they adopt you? Those were other people that hurt you, they’re nothing like that. How could you want to put your NEW family in the same category of memory as those AWFUL people? Can’t you just forget what happened before?

Ugh, so what? I can’t do anything?

Being an ally means you are helping with the fight. You are standing behind to help make the voices of those who have suffered injustice louder, not talking for them. I have my own voice, and I have my own story. Not even my dear husband would presume to speak for me insofar as my race or gender is concerned. Don’t try to speak for me.

Being an ally means acknowledging that people like yourself have done some bad shit to others. Maybe you did some of that shit too, and now you’re trying to make up for it. Good on you. Maybe you never did. Good for you! But it doesn’t mean that you get to draw a line in the sand and say… okay, all those people over there were bad so you need to move on because we’re here to help you. Don’t try to revise or rewrite my history to make yourself feel better.

Being an ally means listening, so you know how you can best help. You may want to jump in with both feet and get this fight going, and that’s great. As Willy Wonka said, “enthusiasm is key.” But listen to those you are trying to help. You can save yourself some heartache and hurt feelings if you just take a minute to listen to the problem without immediately forcing your solution.  Don’t try to take over.

I’ve learned these things through my own trial and error trying to help those that are other than myself. I’ve also learned these things when people other than myself have tried to help me. I don’t want to discourage anyone… quite the opposite! I appreciate the help. And maybe, every once in a while, why don’t you come on over and sit at that other table. You might learn something about yourself.

*did you know they’re making Heathers into a TV series? I am both horrified and intrigued by this.