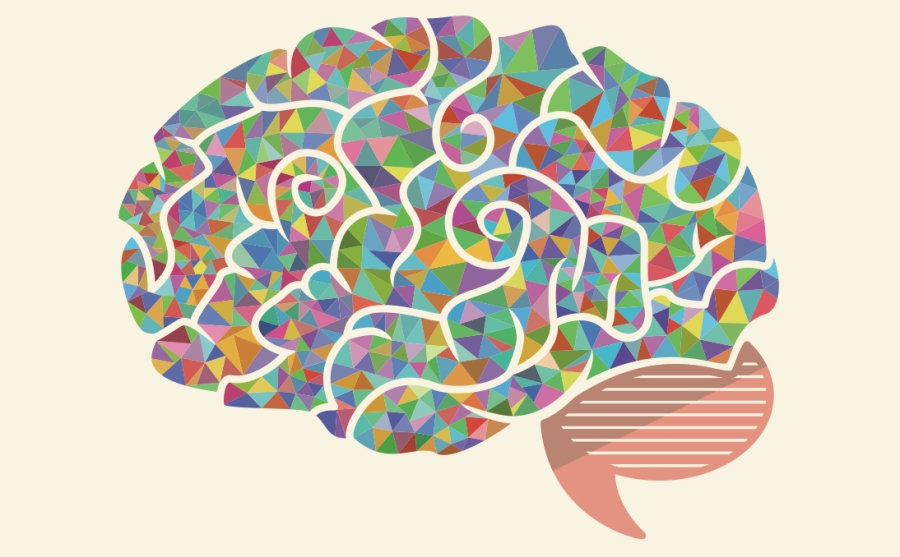 When my oldest was in elementary school, he was having a lot of problems with his reading. We were convinced he had dyslexia but had no money to get him tested. We had tried in vain to get the school to test him; they turned us down. I eventually a turned to a friend who is an ARD Facilitator.  She told me the magic phrases to use and soon we had an officially diagnosed child with a 504 plan and accommodations in place.

The Sunday after the diagnosis, I met her at church and thanked her for what she had done. She had saved us a lot of money and I was very grateful. As we talked about getting kids tested and what not we talked about undiagnosed children in the church. I laughed and told her, “oh, but you can take a quiz online and be diagnosed with just about anything. I mean, according to a test I took online I’m high-functioning autistic.” Her response? “Oh yeah, I could see that, you’re a little Aspy.”

Autism in females is understudied and misdiagnosed1. When you look at the list of traits, it’s easy to see how many of the traits could be mistaken for other things, or as quirks of “just being smart and a little eccentric.” Often they are diagnosed with secondary illnesses that are side-effects of the Aspergers/autism (depression, anorexia, obsessive/compulsive disorder, etc.). 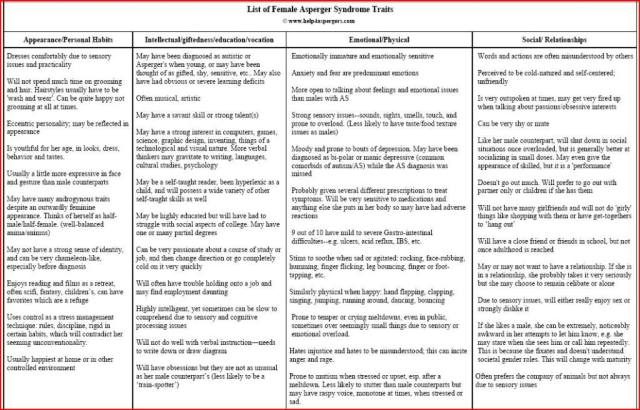 In some cases, it is noted that women are much more successful at masking their symptoms and acting in a “normal manner.”2  They work from meticulous notes kept in their head. They might even channel their hyperfocus to their advantage in work or play. In short, women in autism can often turn their “illness” to an advantage.

Here’s where it gets interesting… I think the internet (and my friend) are probably right. I’ve never been what you would call a “normal” girl. I had always chalked it up to me being a year younger than my classmates. “There was no way I could be as socially adept as my classmates,” I would tell myself, “since they’re all older than me. Everyone is always telling me there is a huge difference between a 13-year-old and 14-year-old.”  When I manifested my need for control as anorexia in my junior and senior year of high-school, I passed it off as OCD and a need to please my parents. I was never really good at mimicking a popular person, instead, I would befriend people of many varied groups and ensure that I had people I could count as “friends” no matter where I was.

Down the line, I was checking off traits: yes, yes, yes, sometimes, yes…. it was both frightening and vindicating. I had always assumed my awkwardness to be a function of my age or my upbringing. But as it turns out… my upbringing had probably forced me to be closer to “normal” than I would have been if left to my own devices. 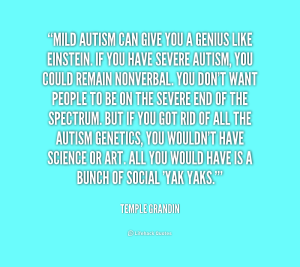 And you know what? I’m okay with this. I take a low dose of anti-anxiety/depression pills to keep the worst of my OCD type symptoms at bay, and that mostly works. Sometimes having a name to call your bundle of weirdness is in and of itself comforting. And honestly, I’m not horrified to learn these things about myself. After all, it has some positive benefits: I taught myself to play drums from YouTube, I can draw and paint very well, and my need to correct injustice created a social justice warrior (much to the chagrin of my more conforming relatives). Rather on focusing on fitting in, I’m more concerned with finding my own tribe, and it makes me happy when I can recognize someone with the same “quirkiness.” 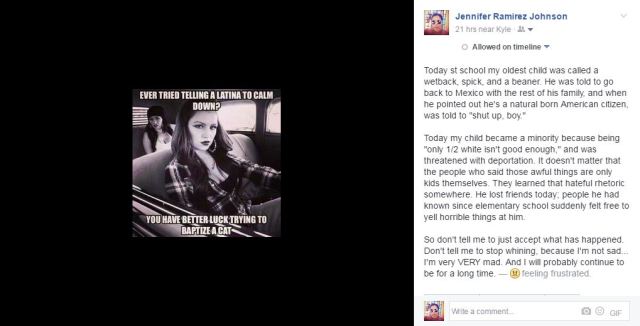 Let’s talk about it a little further.

I would like to say that I was shocked and appalled by what happened, but the sad truth is that I’m not. And that is because this is not the first time I’ve heard those words, or felt the anger rise up in my chest like bile…. it’s just the first time I’ve had that kind of hate directed at one of my children.I had always hoped that no child of mine would ever have to deal with this kind of stupidity. Not because they could “pass,” but because we should be living in a post-racial society by now. All I wanted for them was to not have to deal with the name calling, and the stereotypes, and the assumptions that I had to deal with… that my parents had to deal with… that my grandparents had to deal with… and so on.

But that is not what happened on Thursday.

On Thursday, my son was a target because the color of his skin and the company that he keeps. On Thursday, children that he has known for the majority of his life said some really hurtful things. And he already knew that they felt that way. He’s had to have multiple talks with them about the “stupid things they were saying about Hispanics and Mexicans.” And to their credit, they stopped doing so… around him. Until Thursday. And you know what? It would have been Wednesday, but the kids were out on Wednesday because they needed a mental health day after the nightmare of Tuesday.

I am grateful to have such good friends that sympathize and are similarly offended. It was never my intention for the post to go viral—all ever wanted to do is show people I know that this is REAL. These kinds of stories that you hear on the news aren’t just kids saying things to get attention. My kiddo HATES attention; I kept his name out of the story on purpose. But I needed to show people—many of whom are still my friends—that the choices that we make can have real consequences for real people. And yes, perhaps it was the work of a few asshole kids at this one school… but that’s not the only school that is experiencing this kind of backlash against minority children. There are children who are being told that they’re going to have to go to another school because soon their school will be “all white again.” There are families that are desperately afraid that someone will be knocking on their door and rounding them up in the night, regardless of the immigration status of the various family members. There are young women afraid to walk anywhere at night, and church members afraid to attend services.  And they are just as real as my son. 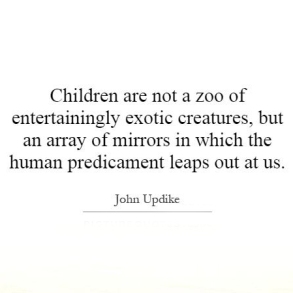 Ultimately, our family will be okay. We are strong, and we raised strong children. My sons are social justice warriors and will gladly take up the fight. They’ve marched in Pride Parades, worn “I am a Feminist” buttons, and stood up to teachers when they’ve felt the lesson was biased or racist in its premise. But if you are reading this… please. Please take a minute to think of the other children who are waking up in a world where they are suddenly “other.” Think before you speak, before you post, or  before you say something thoughtless. Kids aren’t hateful by nature. It’s LEARNED.